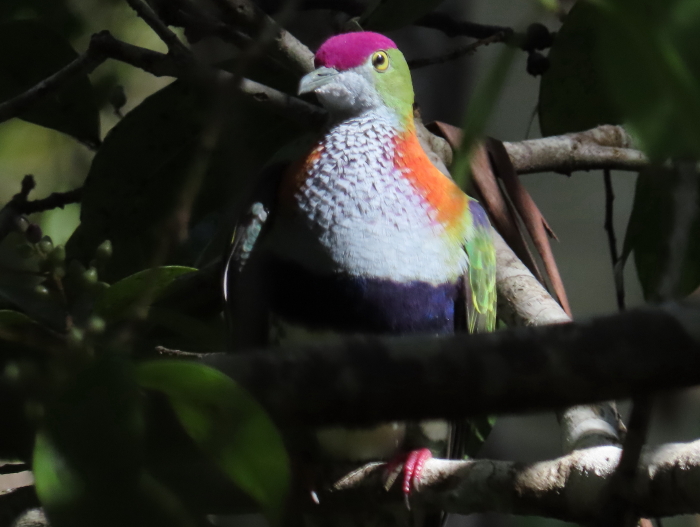 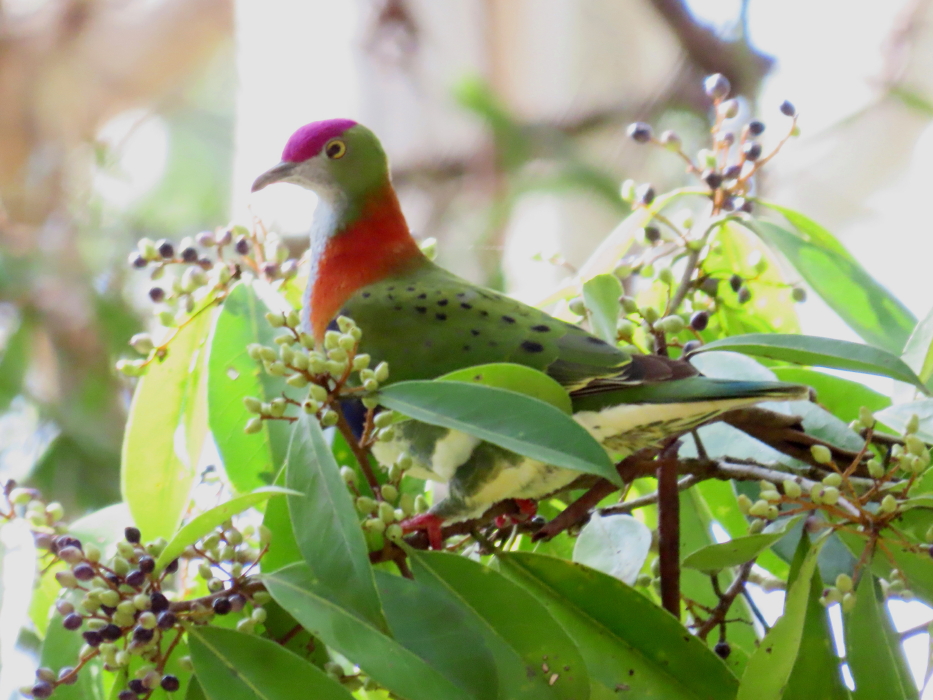 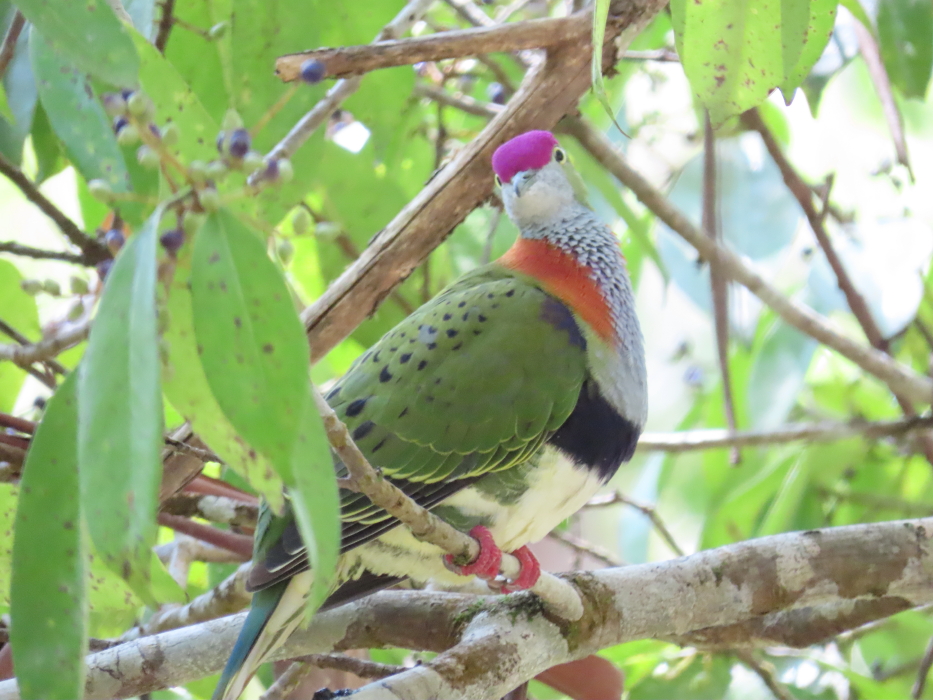 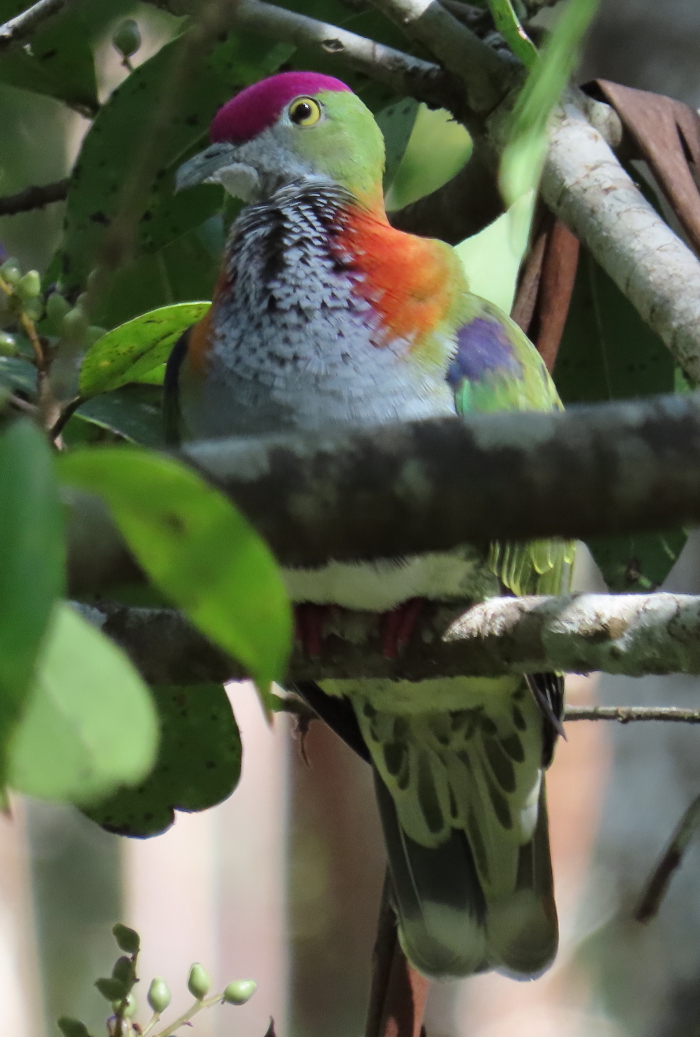 I had a lazy day, too, watching him for hours. He was briefly joined by a Golden Bowerbird (sorry, no acceptable photograph) and some Satin Bowerbirds.

Who says that birdwatching is supposed to be hard?! And imagine, what great photographs someone with a better camera than my little Canon SX70 could take!

Over the last few days a lot more of the Symplocos fruit have ripened, the birds are spoilt for choice.

This male might have already finished breeding, there are a few juvenile doves around. Another male is sharing incubating duties with his mate in a nest nearby. He is sitting tight from about 9 am to 4.30pm. The female has the longer night shift.

There are doves calling almost all day long, it is difficult to estimate how many are here now. They should have plenty of fruits for another month. 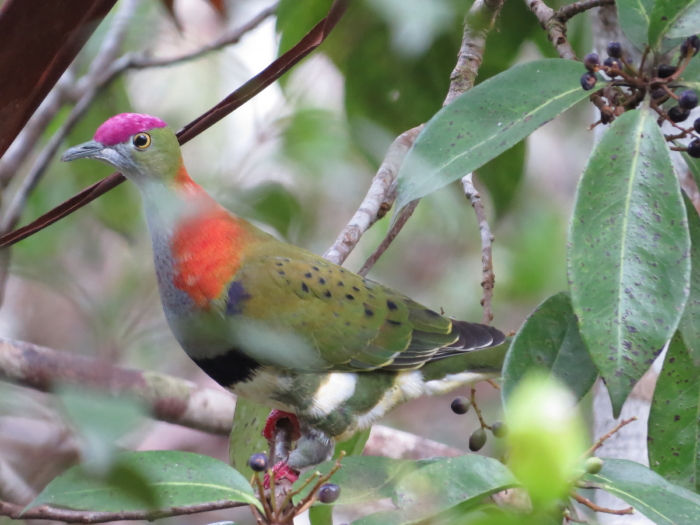 Finally the Superb Fruit-doves are back in droves! Their favourite fruits here ( Symplocos cochinchinensis, which grow as a small understorey tree) are starting to ripen and we should see and hear a lot more of them over the next few weeks. 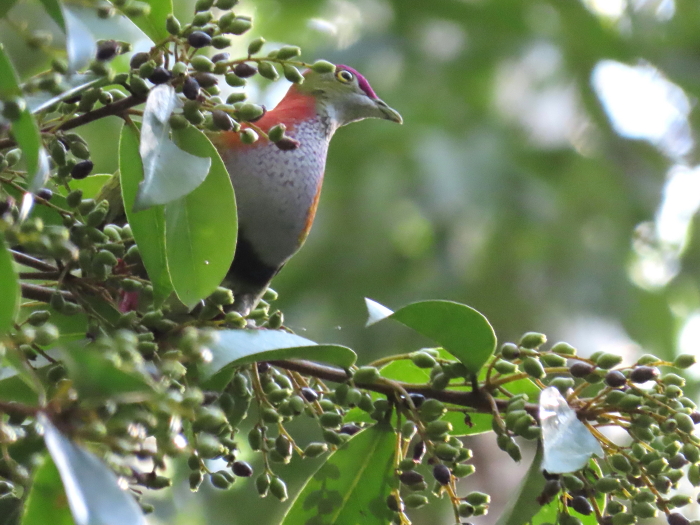 We enjoy hearing their deep ‘whoops’ and ‘ooms’ all over the forest.

For more information and photographs/short videos about those beautful small doves, have a look at our previous blog: 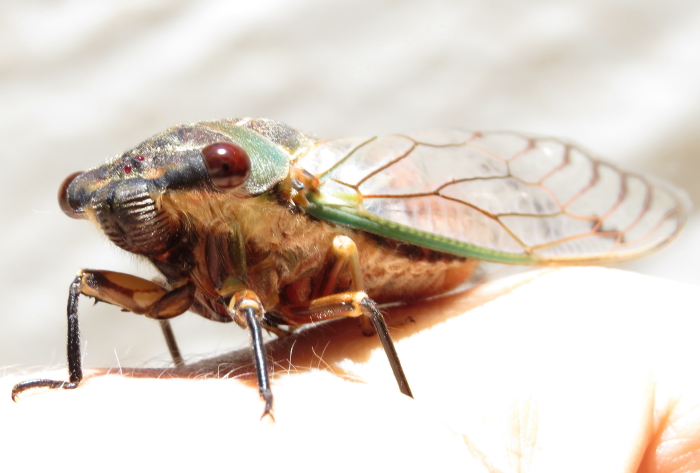 Most cicada species spend many years living as nymphs in the soil, feeding on plant roots. Depending on the species, and probably external conditions, there are mass hatchings in some years, when thousands emerge from the ground and hatch into the relatively short-lived (days to weeks) adult stage.

This summer is  such a year, not just for the Red Roarers (Psaltoda aurora), but also the Northern Double Drummers (Thopha sessiliba). The Northern Green Grocers (Cyclochita virens) are quite abundant every year, but they only call for about 15 minutes at dusk.  All three species are 60-70mm long – quite large!

Males have a mainly hollow abdomen and large sound organs.

Cicada-killer Wasps obviously can tell the difference between males, which are full of air, and females which are full of eggs, as they always catch females to drag into their burrows as food for their offspring.

To give you an idea how noisy Red Roares can be (and they call all day!), listen to this, with the volume on maximum:

If you’d like to hear the songs of, for example, the Deafening Cherrynose, the Sprinkler Squeaker or the Jungle Grinder, go to Dr Lindsay Popple’s website: 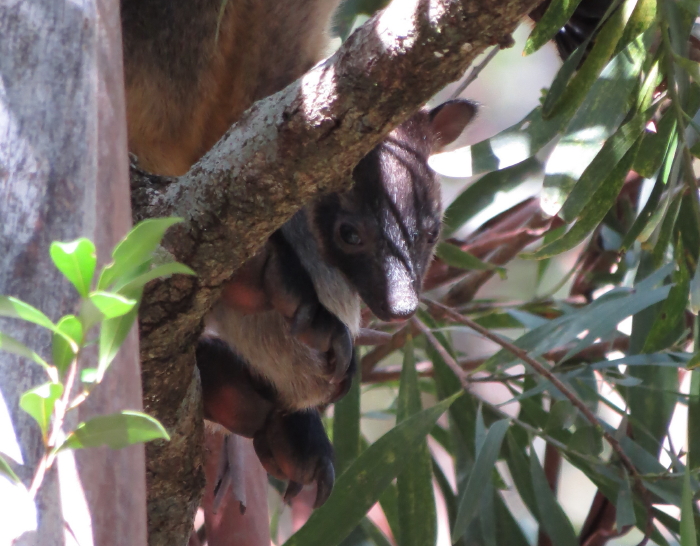 The Turpentine trees have begun to flower, attracting honeyeaters and lorikeets during the day and Little Red Flying Foxes at night. The smaller Symplocos trees are in full bloom and some of our large Rainforest Rock Orchids have just finished flowering. 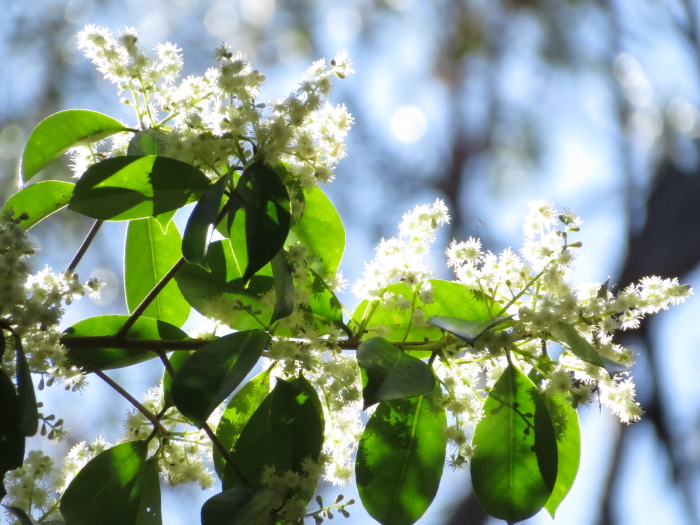 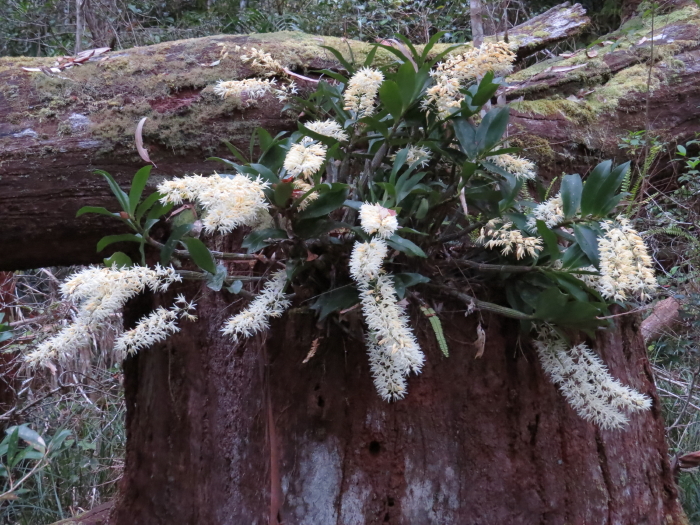 Several small flocks of Scaly-breasted Lorikeets are coming down from the canopy for a drink at the bird baths and pond. 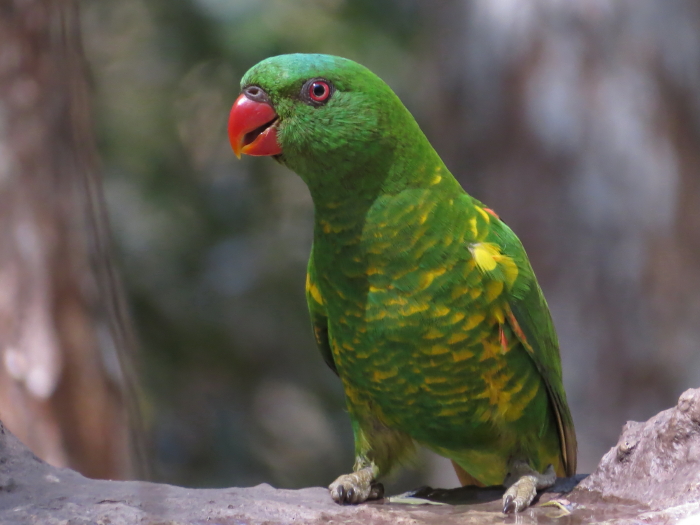 Many Scarlet Honeyeaters are setting up territories and building nests. 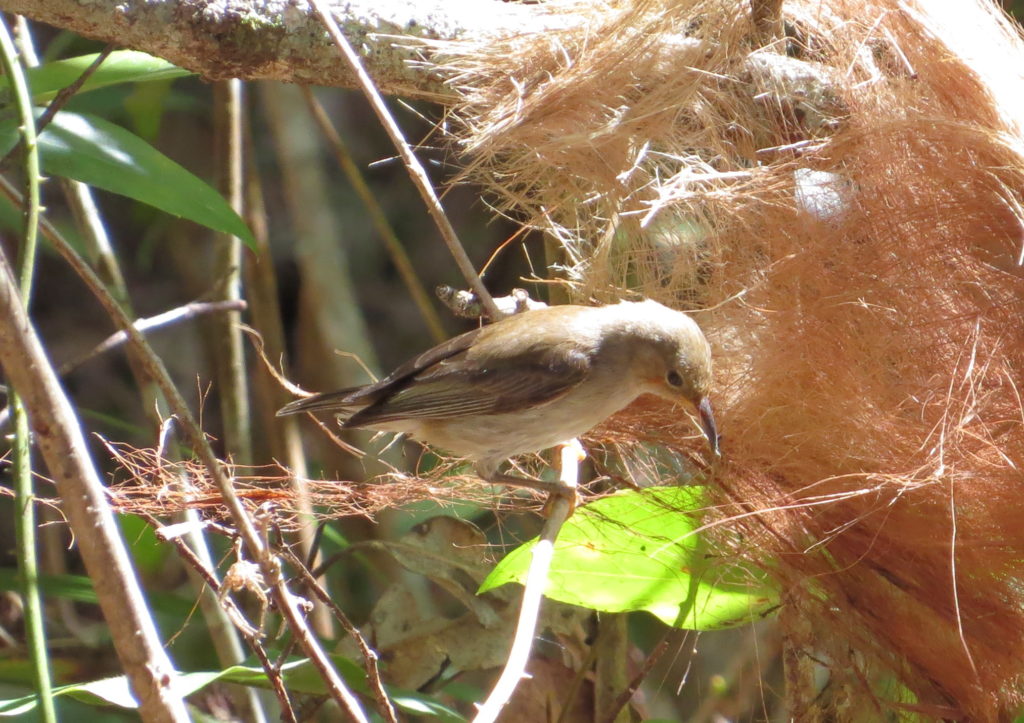 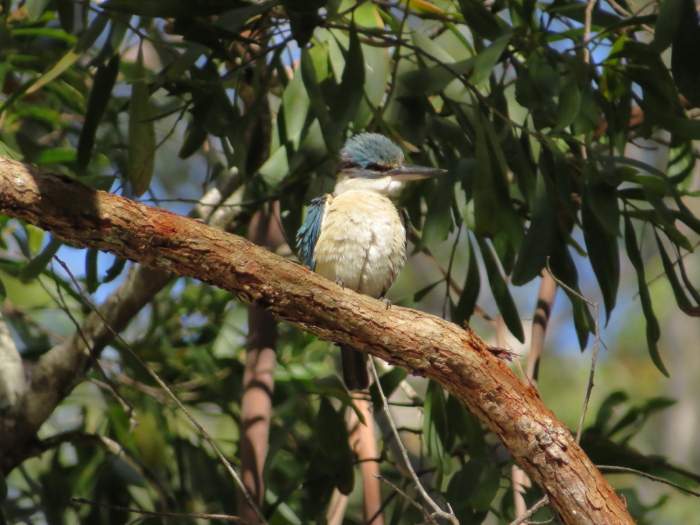 Everyone is very busy and it is difficult to decide where to sit and watch all that activity. Well, I happened to pick a good spot: while others are working hard,

I am sitting on our veranda to write this. A female Lumholtz’s Tree-kangaroo is sitting about 5 metres away from me in a small Acacia, resting and feeding occasionally. 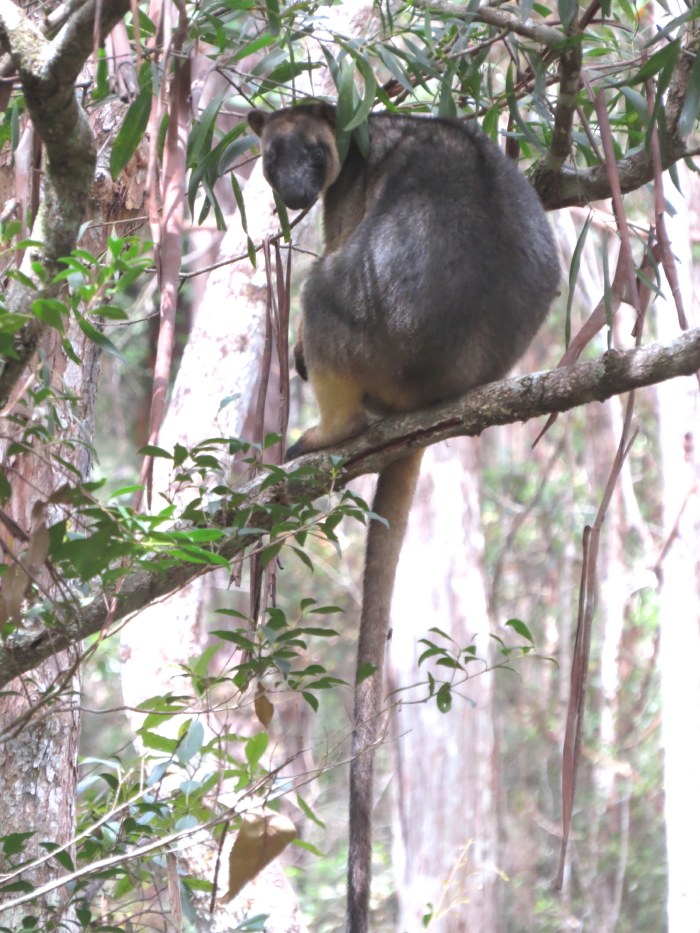 When she eventually turns around, I can see the joey, too . 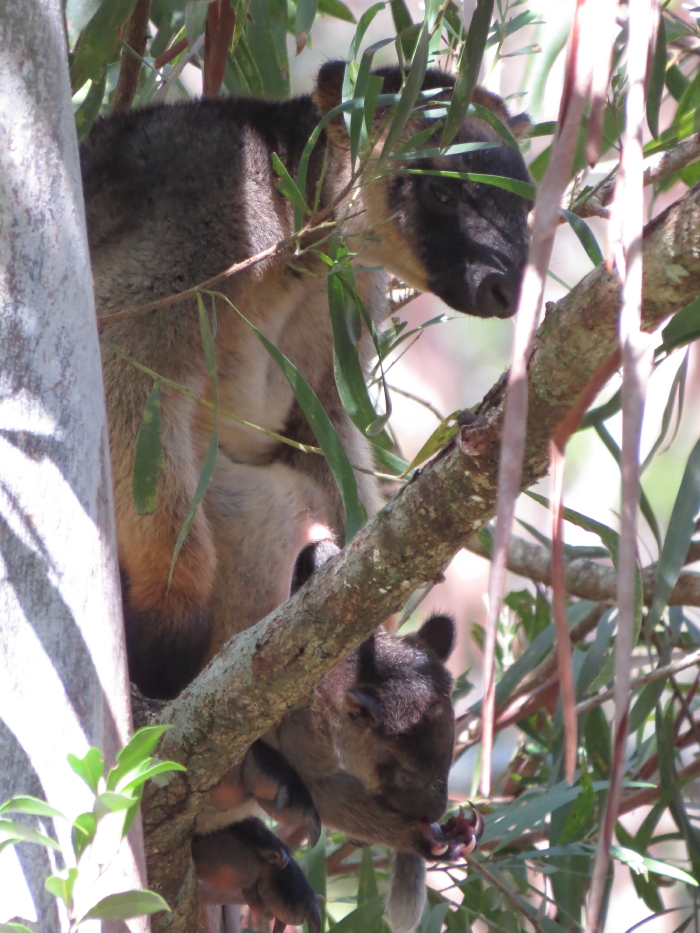 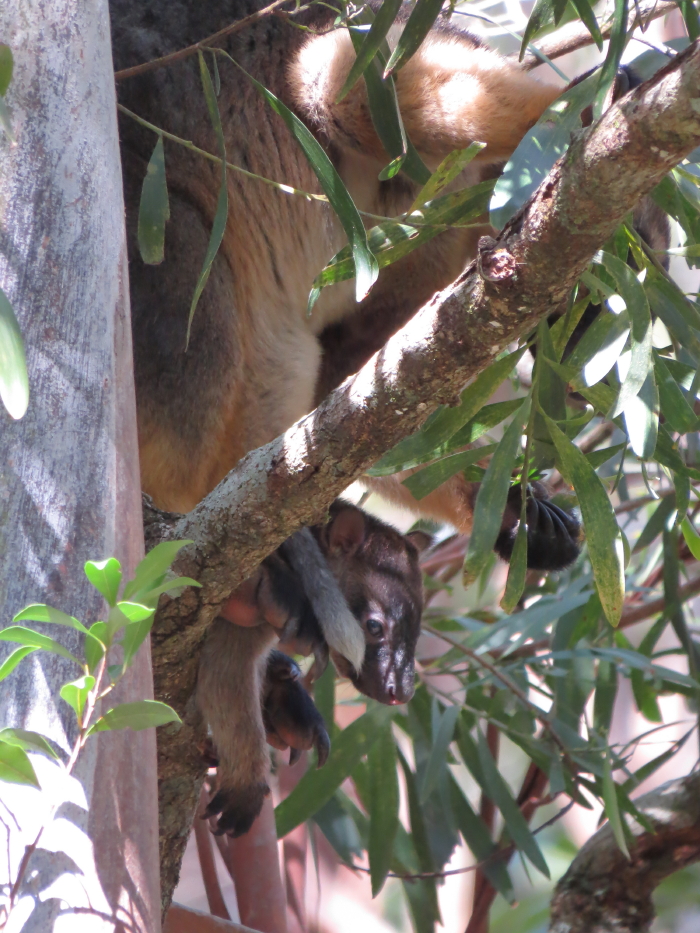 It is still very small and I am looking forward to see it leave the pouch! 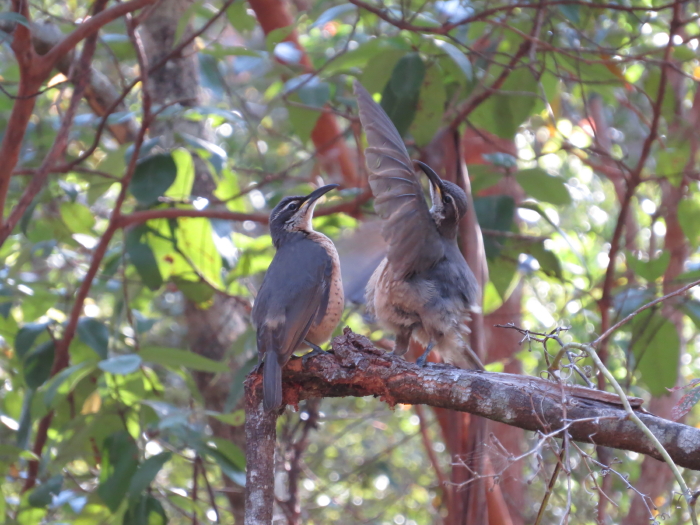 The Victoria’s Riflebirds have been displaying all year round on a tree stump near the cabin and activity picked up in August. Now two immature males and an adult bird are jostling for pole position. The young males often also perform on other branches.

Recently, one female was observed with nesting material in her beak, another female is still watching the males. 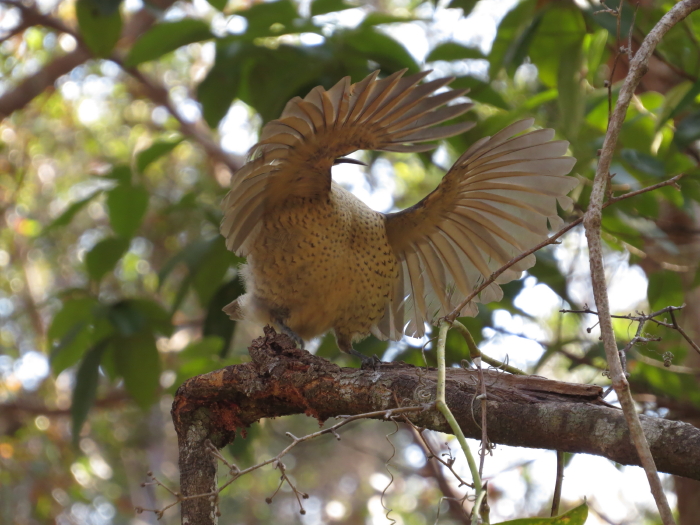 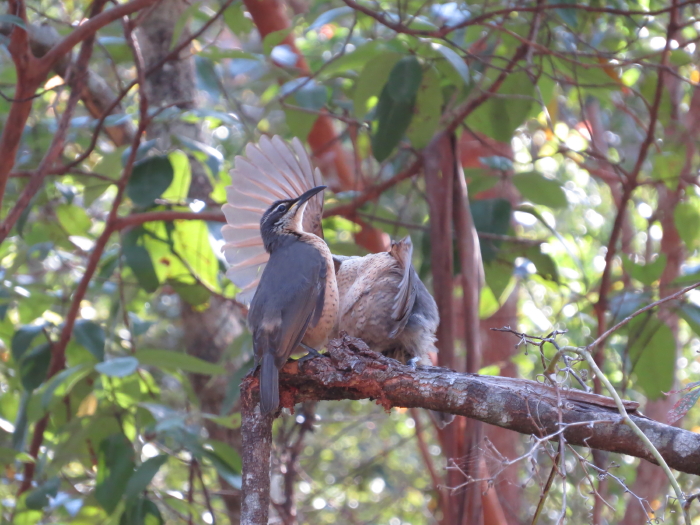 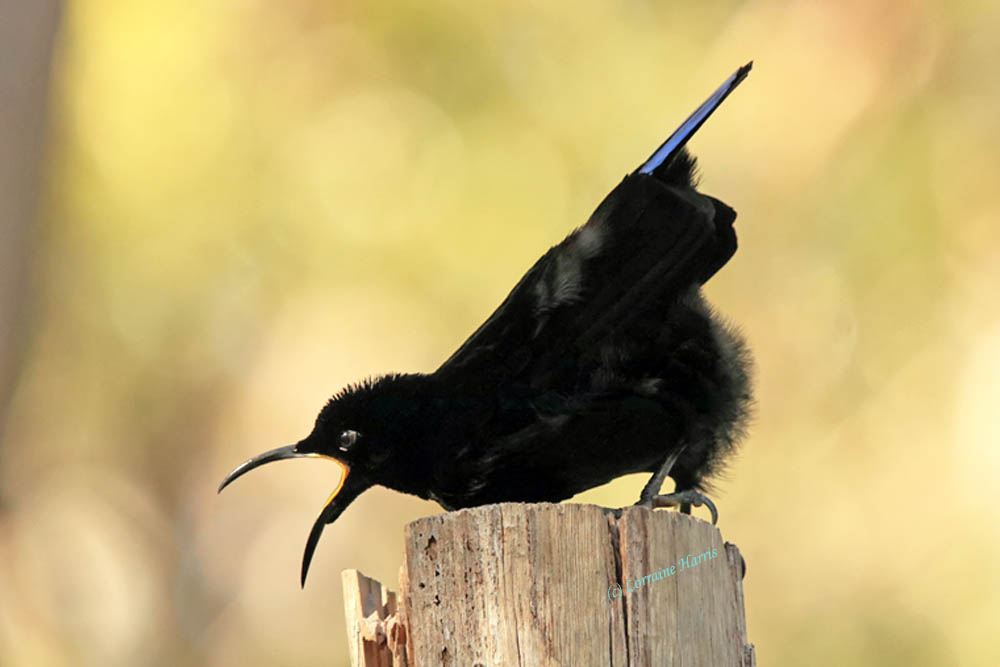 Meanwhile, the one year old cassowary, so abruptly abandoned by his father, when a large female turned up and convinced dad to mate with her 3 months ago, is visiting occasionally and can sometimes be seen honing his kicking skills. Like many young birds and mammals, play-fighting is an important part of growing up. Lacking siblings, “Chicko” has to make do with shrubs, logs and small trees. He doesn’t fall over as often anymore, but still has to work on his target practice!

Afterwards, he had a good rest: 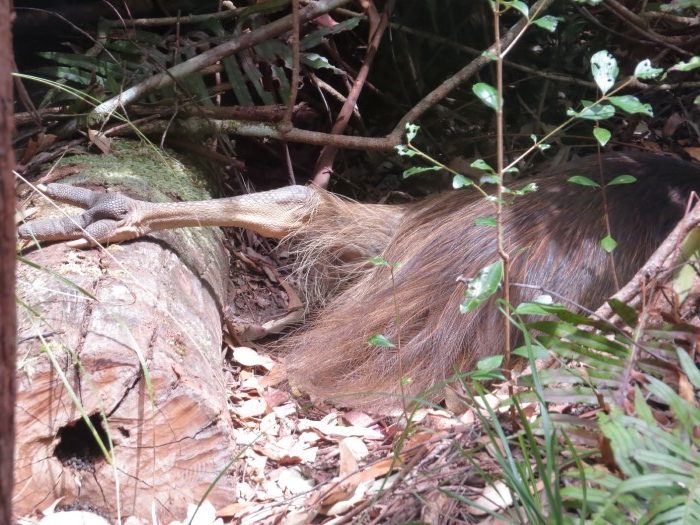